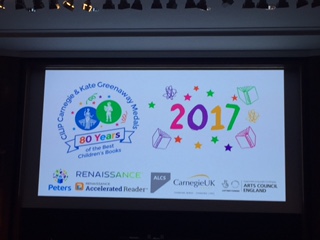 Medal ceremony on Monday. It was an extra special occasion as the Carnegie award was celebrating 80 years, while the Greenaway award is 60 years old. It was the most gloriously uplifting event I’ve been to in a long time. Beautifully compered by Cerrie Burnell, & included a magnificent poem by musician and educator Amy León.

Carnegie medal is awarded for an outstanding book written in English for children and young people. 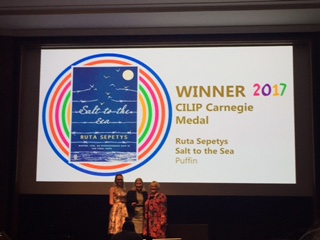 It was won by Ruta Sepetys with Salt to the Sea, a fictionalised account of the worst maritime disaster in history. I can vouch for what a sensational and evocative read this is. 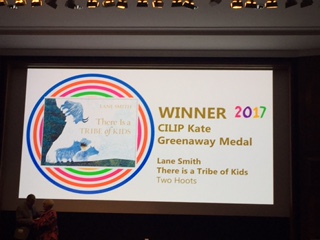 Kate Greenaway medal is awarded for an outstanding book in terms of illustration for children and young people. The winner was Lane Smith for There is a Tribe of Kids

There are also two Amnesty CILIP Honour commendations awarded to:

All of the authors spoke eloquently & from the heart during their acceptance speeches. If only all acceptance speeches could be as well written & delivered. All stressing the importance of empathy. Several people made comments about how a good book and story can last a lifetime.  Books unite us, sharing stories and discussing history together results in empathy. Rita Sepetys summed it all up by saying ‘compassion has no borders’.

It was a beautiful celebration of the written word. It’s importance for children, & the role that authors, librarians & publishers have in ensuring the right book gets to the child at the right time.

The event itself was perfect & the organisers deserve real credit; thank you. RIBA works well as a venue, the surroundings are visually stunning & the space, as you’d expect from the architects’ professional association, is perfectly designed with a light and airy reception hall and outside terrace.

The addition of 100 school children, who had taken part in shadowing reading schemes, was a wonderful idea. They added another dimension to the proceedings. From ensuring loud cheering & whooping during the ceremony, to playing chase the author for an autograph during the reception.

This week marks the start of refugee week in the U.K, all the more fitting that three out of the four awards presented were stories of refugees and displaced children.

View all posts by katefromuk

This site uses Akismet to reduce spam. Learn how your comment data is processed.